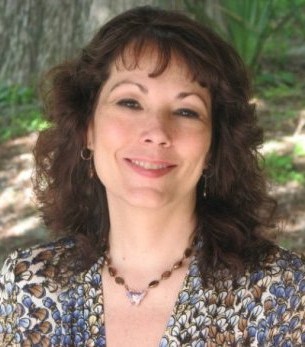 Lori spent her early years reading books in a tree in northern West Virginia. The 1980s and 90s found her and her husband moving around the Midwest, mainly because it was easier to move than clean the apartment. After seventeen frigid years in Minnesota, she fled to coastal North Carolina in 2013. She will never leave, and if you try to make her, she will hurt you.

She has worked in public libraries, written advertising copy for wastewater treatment equipment, and managed a holistic veterinary clinic. Her current day job, conducted from her World Headquarters and Petting Zoo (her couch) is as a full-time editor for indie authors and small publishing houses.

Her dogs are a big part of her life, and she has served or held offices in Golden Retriever and Great Pyrenees rescues, a humane society, a county kennel club, and her own chapter of Therapy Dogs International.

She has been a columnist and feature writer for auto racing and pet publications, and won the Dog Writers Association of America’s Maxwell Award for a series of humor essays.

Parents of a grown son, Lori and her husband were high school sweethearts, and he manages to love her in spite of herself. Some of his duties include making sure she always has fresh coffee and safe tires, trying to teach her to use coupons, and convincing the state police to spring her from house arrest in her hotel room in time for a very important concert. That last one only happened once—so far—but she still really, really appreciates it.